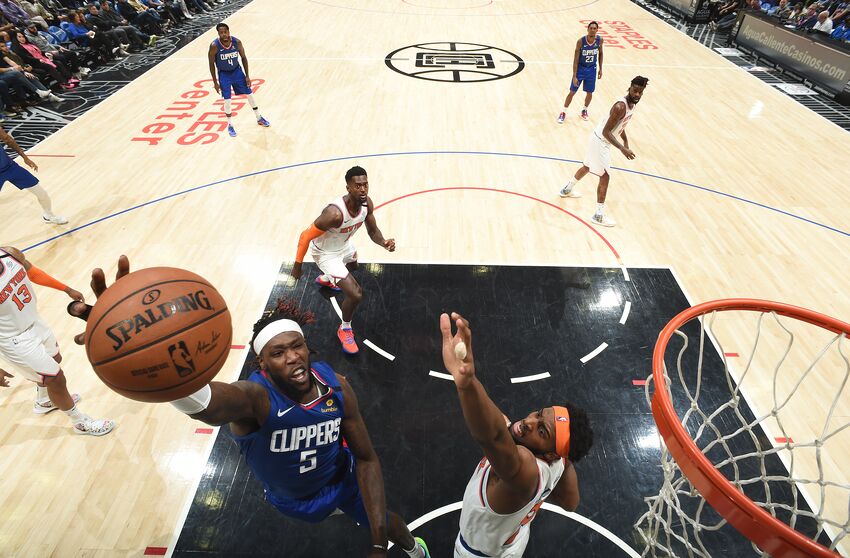 LOS ANGELES, CA - JANUARY 5: Montrezl Harrell #5 of the LA Clippers shoots the ball against the New York Knicks on January 5, 2020 at STAPLES Center in Los Angeles, California. NOTE TO USER: User expressly acknowledges and agrees that, by downloading and/or using this Photograph, user is consenting to the terms and conditions of the Getty Images License Agreement. Mandatory Copyright Notice: Copyright 2020 NBAE (Photo by Andrew D. Bernstein/NBAE via Getty Images)

After yesterday’s horrible performance, the LA Clippers held off the New York Knicks despite giving up 45 points in the first quarter.

The LA Clippers were not happy with yesterday’s performance. They allowed the then 13-22 Memphis Grizzlies to come into Staples Center and absolutely dismantle them. After the game, players made backhanded remarks about each other and about the team not being great. Given the mood and with the 10-24 New York Knicks coming to town the next day, many expected the Clippers’ second back-to-back game to go much differently even with Kawhi Leonard sitting out.

From the tip, fans were in a panic. The Clippers, despite all their talking yesterday, looked just as lost on defense and like they were again going to give a half-assed effort. There were the usual energy guys like Patrick Beverley (who returned from a wrist injury) and Montrezl Harrell who played their hardest, but the team gave up 45 points in the first.

Thankfully that is where the similarities to yesterday’s game ended. in the second quarter, the Clippers bounced back in terrific fashion. The bench duo of Montrezl Harrell and Lou Williams led the charge, scoring 14 and 18 points respectively in the quarter. Paul George added nine of his own while JaMychal Green put in six.

The second quarter was peak Clippers’ basketball. It reminded fans of just how dominant this team can be when they are locked in. It also showed us that unlike yesterday, the team is capable of bouncing back after falling behind and getting into another gear.

The scoring kept coming while the defense turned up. From the second quarter onward, the team gave up an average of just 29 points per quarter. A late run from the Knicks in the fourth put the game into question for a second, but Lou Williams made sure to seal the game for the Clips, 135-132.

The trio of George, Harrell, and Williams was magnificent. They became the first trio in LA Clippers’ history to score 30+ points. Harrell tied his career-high of 34 while George and Williams had 32 apiece.

Bouncing back against the Knicks was important. Even with the excuse of having two afternoon back-to-backs, the team could not afford to drop both contests. With four days of rest ahead of them before they are back in action versus the Warriors on Friday, a quote from Kawhi himself comes to mind:

“It’s gonna take success, mistakes, arguments, losing games, and winning games to get to that next level. It’s about not shying away. We all gotta keep being aggressive and let each other know when we see something out there.”

Next: Vote Kawhi Leonard and Paul George as All-Stars

This weekend was just a building block. Onto the next one.